I wanted to switch gears a bit and do a paper on Electron Paramagnetic Resonance (EPR), also know as Electron Spin Resonance (ESR).  The paper for this weeks is

I discussed EPR briefly in an earlier post (http://sitspinnmr.blogspot.com/2014/02/hyperpolarization-without-persistent.html).  To review, one can think about EPR much like you think about NMR.  In a simple 1D 1H NMR spectrum parameters like the resonance frequency (the chemical shift plus any scalar couplings) and peak integrals can be interpreted to understand properties of the molecule, for instance the molecular structure of a small drug-like organic molecule.  There are similar parameters for EPR.  In EPR the resonance frequency is reported as the "g-factor."  Instead of depending on the shielding of nuclei by electrons like the chemical shift in NMR, the g-factor depends on the coupling of the spin motion of the electron to the orbital motion (spin-orbit coupling).  These days every organic chemistry textbook contains a table of chemical shifts classified by functional group.  With EPR, on the other hand, I am not aware of any standard tables of g-factors.  I don't want to suggest that the spin-orbit coupling is not sensitive to electronic structure.  Of course it is!  Spin-orbit coupling depends on which orbital the unpaired electron resides.  For metals, the g-factor is crucial.  For organic (oxygen, carbon and nitrogen) radicals, though, it seems like all g-factors are ~ 2.  Although the g-factor is not diagnostic in these cases, the coupling to magnetic nuclei are!  The unpaired electron will experience "hyperfine" coupling to nuclei, such as 14N (nuclear spin I = 1).  The electron is split into 2I+1 lines.  Hence if the nuclei is 15N (I = 1/2) the EPR signal is a doublet.  If the nuclei is 14N, the EPR signal is a triplet, but all three legs have identical height.  (As an aside, I'll mention to organic chemists that they should look at the CDCl3 signal in a 1D 13C spectrum to see an equivalent effect).  EPR spectra differ in two key ways from NMR spectra.  First, the x-axis is magnetic field (in gauss or telsa) not frequency.  Second, the y-axis is the first derivative of the absorbance.

Now that we are all experts on EPR, what is it that Chikvaidze and co-workers are measuring?  There is a branched polymer in skin and hair called melanin that controls pigmentation color.  This polymer is made of varying amounts of two monomers, called eumelanin and pheomelanin.  The former is associated with dark (brown or black) colors, the latter with red.  Eumelanin contains a O-C-C-O semiquinone and gives an EPR signal consistent with an oxygen radical (a singlet).  Pheomelanin contains a O-C-C-N semiquinonimine and gives and EPR signal consistent with a nitrogen radical (triplet).  According to the authors the measurement of the concentration of pheomelanin in skin samples is "an issue of great interest in the world" because UV-mediated breakdown of this molecule produces reactive oxygen species which "might help to explain the relatively high incidence of skin cancer among red-haired individuals."  There are assays available to determine the ratio of pheomelanin/eumelanin in hair samples that involve chemical treatments, etc.  Because these molecules are paramagnetic, it is possible to use EPR as a non-invasive assay to determine the amount of pheomelanin (ug/mg) in hair samples.

What did the authors do?  They collected 113 hair samples from their students (42 black, 28 dark brown, 27 red and 16 blond - I assume each sample is from a different student.  It is not clear if all samples are used in this study.) and divided the samples in bundles of equal mass (40 mg) and length (1.5 cm).  Because they need to make very accurate measurements of the g-factor, the authors use a standard of Mn2+ (in MgO powder).  I assume the standard is in a sealed capillary which is placed in a 4 mm EPR tube along with the hair bundle.  EPR are measured using an X-band EPR spectrometer at room temperature.

The authors used microwave saturation to filter one of the components of red hair.  Let me try to explain saturation succinctly.  If the rate of spin flips between the spin-down and spin-up state is faster than the rate of relaxation back to the ground (spin-down) state, then the intensity of the signal is attenuated by saturation.  The rate of spin flips depends on microwave power.  The relaxation rate depends on R1 (= 1/T1).  Let's say there are two signals in the EPR spectrum.  One has a small R1 (aka large T1, aka slow relaxation) and the other has a large R1 (aka small T1, aka fast relaxation).  We can then choose a microwave power such that the rate of spin flips is larger than the small R1, but smaller than the large R1.  So the slow relaxing signal is saturated and maybe even disappears.  One can play this game with a 10 uM solution of TEMPOL radical under an atmosphere of air (which includes paramagnetic oxygen that will increase R1) or nitrogen.  At high microwave power the slow relaxing (large T1) nitrogen atmosphere sample will saturate and give no signal, but the fast relaxing (small T1) air atmosphere sample will not.

Figure 3 shows the EPR spectrum of red hair as a function of microwave power: 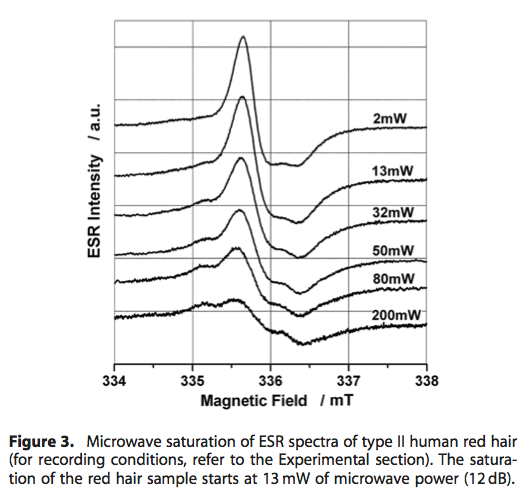 The authors interpretation is that "the triplet (hyperfine coupling = 0.372 mT, g-factor = 2.0055) .. evident after saturation of the singlet at maximum microwave power, corresponds to pure pheomelanin in the .. spectrum."

Now the authors are prepared to address their main goal: determine the ratio of pheomelanin/eumelanin in hair.  Given that pheomelanin has a g-factor of 2.0055 and eumelanin has a g-factor of ~2.0036, the authors hope to use the experimental g-factor of hair to determine the ratio.  Normally, one would make a calibration curve with different ratios to test the fitness of this method. Not so simple in this case.  One can mix different ratios of red and black hair, if you assume black hair is pure eumelanin.  Figure 4 shows the calibration curve. 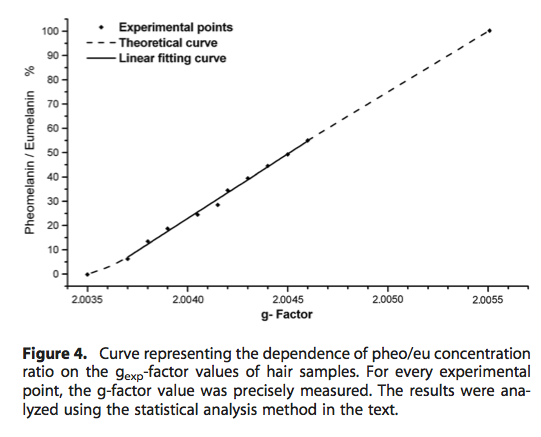 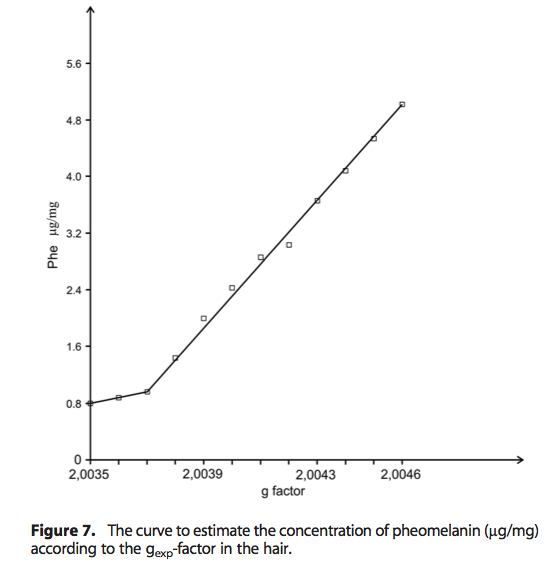 My only beef with this paper is that the accuracy and precision of this method to measure pheomelanin and the ratio of pheomelanin:eumelanin is not addressed.  Let me state it another way.  Let's assume you can distinguish hair that contains 0.8 ug/mg pheomelanin from hair that contains 4.8 ug/mg.  Can you distinguish 2.4 ug/mg from 2.5 ug/mg?  To answer this question I did some simulations in MatLab using EasySpin (http://www.easyspin.org/) a supercool simulation program.  My script is at the end of the blog.

The first plot shows the simulated EPR spectra of blond (in blue) vs red (in green) hair using data from Table 2 in the paper. 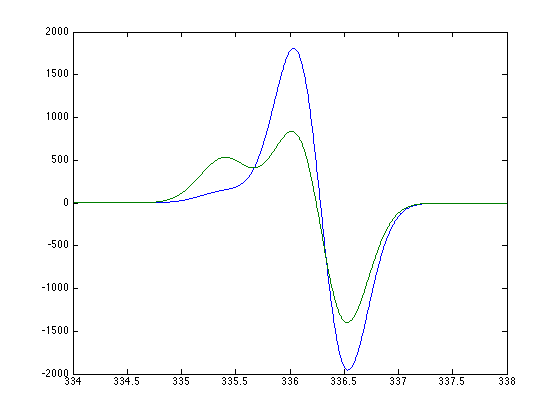 Two different red hair samples with pheo/eu% equal to 59 (blue) and 54 (green) look identical to me (see below). 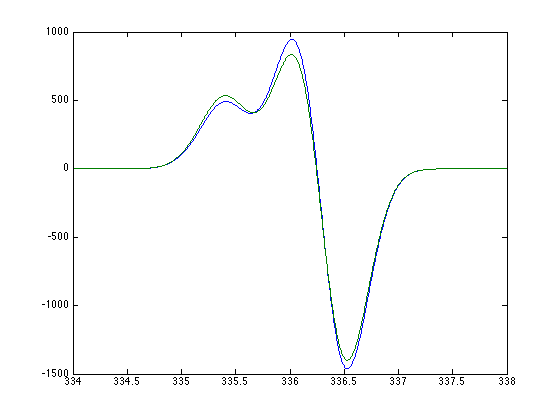 Maybe I'm screwing something up with my simulations, but based on these results I am skeptical that X-band EPR can pick up subtle difference is pheomelanin:eumelanin.  Q-band (35 GHz) is a different story, though.  Signals at different g-factors no longer overlap and using double integrals, it may be possible to estimate pheomelanin concentration.  Below is the Q-band simulation of pheo/eu% equal to 59 (blue) and 54 (green).  I also assumed smaller lwpp to exaggerate the transitions. 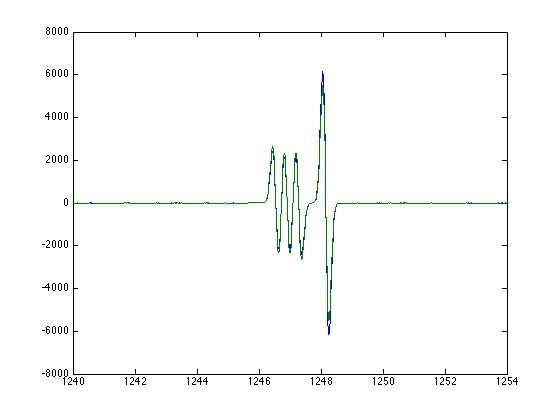 Overall, I like this paper because it made me think about EPR and play with EasySpin.  It also got me worried about hair in my EPR cavity!  I'll have to keep the gingers away from my instrument.

% Mixture of pheomelanin and eumelanin
% based on data from Chikvaidze et al. MRC 2014

Mr. Sit and Spin
Keeping you up to date on the world of NMR.